La Rioja is a spectacular and unique place for cycling.

Halfway between Atlantic and Mediterranean climates, its privileged geographical situation generates a diversity of landscapes difficult to find in such a small space.

Mountains, vineyards, quiet roads, the Ebro river basin, traditional and design wineries, traditional and modern gastronomy, prehistoric remains, medieval monuments, fortified villages, monumental towns full of culture and history … this is the environment in which we will ride, in short… La Rioja. 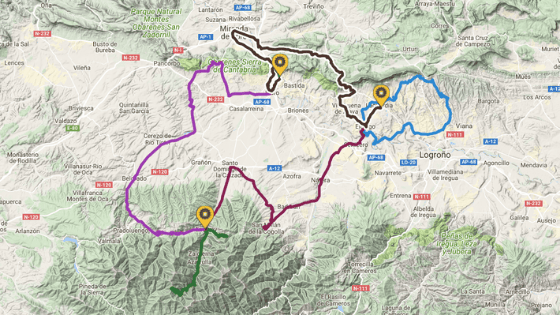 Circular stage, first riding on the slopes of Sierra de Cantabria, then pedaling theEbro vineyards. A route involved in the wine environment and culture.

Stage in which we will meet the vineyards of Rioja Alavesa and the mountain villa¬ge of Ezcaray. The Monastery of San Millán de la Cogolla - World Heritage Site -will be today’s highlight.

High mountain stage in which the ascent to the legendary climb of La Cruz de laDemanda - stage finish for several “Vuelta a España” editions - will be the reference.

Contrasts stage between the vineyards from which we will start and finish and theAlava Mountain forest through which the rest of the stage will take us.

Do you have any doubt?